December 03, 2011
We had so much fun last year at Toys 4 Tots, that we knew we had to make it an annual family tradition! When we arrived Mikey spotted the man in the red suit, and then remember why were there. 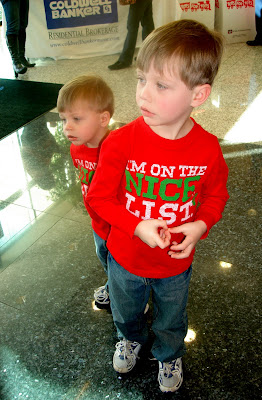 Ryan was the big helper this year! He was so funny, he waved off the Marine, and put the toys in the box all by himself!
Here the Marine asked if he liked playdoh, and Ryan's only response was, " It goes in the box." 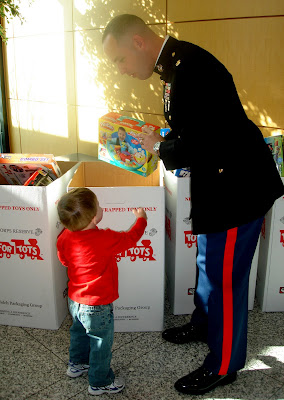 Once our good deed for the day was done, we waited to see Santa!
Thank goodness, their wasn't a long line, as Ryan made a bee line for Santa.
Mikey kind of fidgeted, and his hands went to his mouth...for some reason he just wasn't himself! 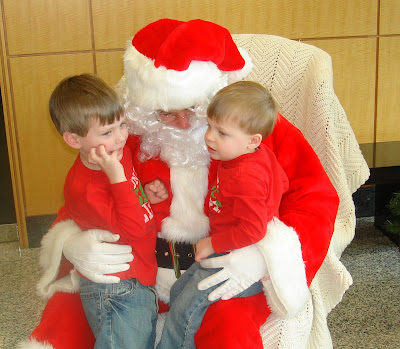 Thank you Santa for talking to Mikey and Ryan, as they both warmed up!
Ryan of course mentioned the trash truck, and Mikey said he just wants something cool! 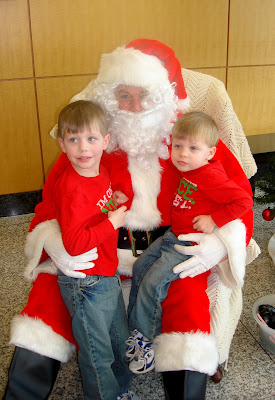 We then saw other costumed characters from Toy Story; Jessie, Woody and Buzz. We thought the kids would be so excited...umm, not so much! Mikey flipped out! Full on melt down, he wanted no part of anything else. Wailing and moaning, he was 100% done!

Where as Ryan was really thrilled to give Woody a hug, and pet Bullseye the horse, he was just happy go lucky. Without a care in the world!

We then spotted Darth Vader and a Storm Trooper, who lead us down a hall to have a group photo taken. Mikey still was not wanting any part of any of it!

Ryan was a hoot! He walked right up to the red eyed star wars guy, leaned in almost fore head to fore head, and just laughed trying to figure out what he was! As I am not a fan of Star Wars, I wasn't much help! I was pulled into the picture by the storm trooper... Ryan and I said cheese, while Mikey still was whimpering he just wanted to go home! Ryan gave everyone a high five, and marched out of the room, grinning ear to ear! 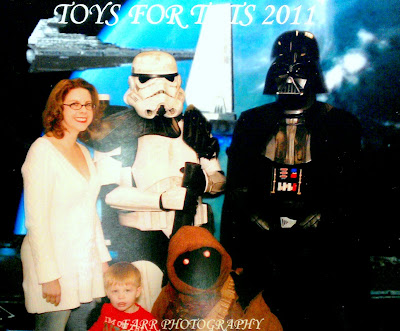