Wednesday, March 21 through Sunday, April 1
Ringling Bros. and Barnum & Bailey Presents
Ringling Bros. and Barnum & Bailey presents Fully Charged is an all-new surge of circus entertainment where megawatts of thrills explode off of the arena floor with breathtaking dare-devilry, superhuman stunts and never-before-seen performances that energize Children of All Ages! Fully Charged invites families to disconnect from the digital world and plug into a circus experience like no other. The 141st Edition of The Greatest Show On Earth is the most electrifying edition of Ringling Bros. ever to come to Baltimore! Come one hour early to meet our animals and performers at the All Access Pre-show – FREE with your ticket! - Press Release

I was contacted by Shea Jackson, of Macaroni Kid Northwest Baltimore, to write a feature, on her behalf! Who wouldn't want to take their kids to the Fully Charged, Ringling Bros. and Barnum & Bailey Circus? We arrived at the Press Party, and enjoyed a full buffet featuring Foster Farms lower sodium, 100% whole grain corn dogs. (The boys thought they tasted great.) I was pleased, to see Tracy of Macaroni Kid Timmonium and her family, were there too! The performers and clowns walked from table to table, and signed autographs and took pictures. The clowns were so funny, the boys loved every moment! The Ringmaster Brian Crawford Scott came to our table and said hello to the kids. He answered all of Mikey's questions: Why do you wear a funny hat? Do the clowns always wear funny shoes? Have you ridden on the elephant? The Ringmaster fielded all of Mikey's questions and then gave Ryan a high five. I loved that the kids were able to interact with the performers prior to the show! 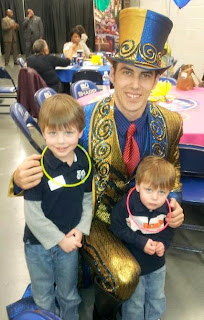 They then announced that the "All Access Power Up Pre-show Party," was going to begin! When my family walked onto the main floor of the circus, there were already several thousand people there! If you are a ticket holder, then you get to take part in the fun as well, as it is a free event! We arrived too late to stand ring side to see all of the action up close, but a clown named Brian Foster, signed an autograph and handed us clown noses, and asked the boys to be honorary clowns for the night! Other children were invited to try on costumes, juggle with the clowns, or stand ring side while Asia the elephant painted a picture. (One lucky ticket holder was drawn to take the unique piece of art home!) 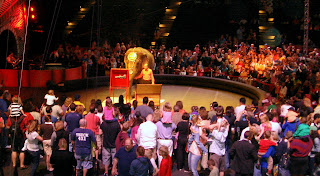 The National Anthem was presented in a very unique way, as I had never seen a flag carried in on an elephant! The show opens with a comedy skit, and explains the fully charged theme. (My boys thought it was hilarious!) The whole ensemble then takes part in the grand entrance and the theme song "Fully Charged," is sung by the Ringmaster. (The kids literally gasped the first time they saw the herd of elephants holding the tail of the one in front of it!) Clown Alley soon takes over, and entertains the crowd with "How many clowns does it take to screw in a light bulb?" The adults in the arena laugh right along with the kids! From horses, to tight rope walking, stilt walkers, jugglers, strong men, aerialist, and lots of clowning around the first half of the show held the attention of my 3 and 4 year old the entire first half! 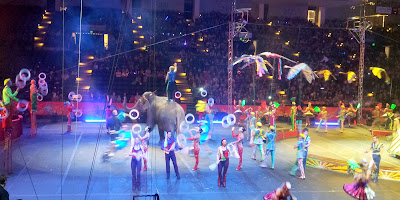 I wondered how on Earth they would top the first half of the show. The second half of the show had us on the edge of our seats, and just waiting for the next amazing thing! The Human Fuse, Brian Miser; shot out of a crossbow, like I have never seen before, shocked and amazed the kids with a stream of sparks and fire! Trainer, Tabayara; and his tigers and elephants steal the show while doing marvelous tricks! There are bouncy stilt jumpers, acrobats, and feats of strength, which just boggled my mind! The kids loved every second we were there, and want to know how soon we can see another show! 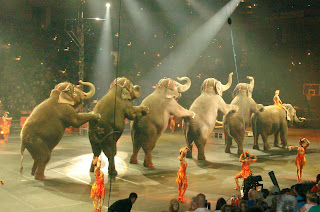 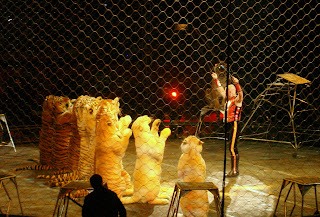 For more info: Use Code 6MOM at Ticketmaster.com or mention the code when calling to SAVE $6 on tickets; Offer excludes Circus CelebritySM, Front Row and VIP seats • No double discounts • Offer applies to all performances EXCEPT Sun. MAR. 25 at 1:00 & 5:00 PM at the 1ST Mariner Arena 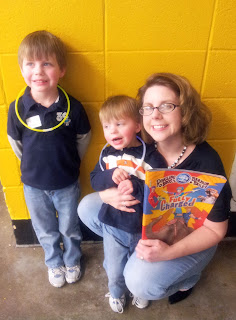 *I was not compensated for this review. We were given 4 tickets and passes to the Press Party, via Macaroni Kid NW Baltimore, and Shea Jackson.