April 29, 2012
Mike surprised the boys and I with a trip to Washington DC! Mikey has been asking to see the dinosaur bones at the Smithsonian, and Ryan wanted to see a jet. I wanted to visit the new National World War II Memorial, National Museum of the Marine Corps, and Arlington National Cemetery. 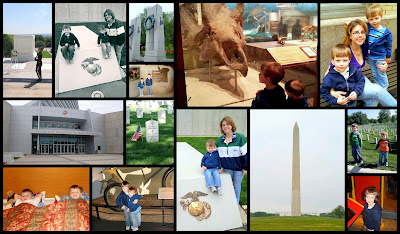 The National Museum of the Marine Corps was so cool! Ryan saw several jets, tanks, and helicopters, he was a very happy little boy! The boys then enjoyed the section about Boot Camp, and thought the booth with the Drill Instructor screaming at you was funny. I on the other hand almost wet my pants, as the female Drill Instructor was screaming at me...something about sending me home to my Mommy, as I just was not cutout to be a Marine. Mike tried the rifle range simulator, and did really well! I am so glad we made the extra trip to Virginia, as we really enjoyed all of the USMC history. 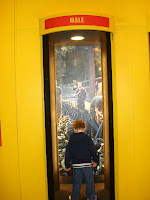 The Natural History Museum, in Washington D.C., was everything the boys wanted it to be! I was so proud when Ryan yelled Triceratops, and an older woman stopped us to say how impressed she was, as he was so young. The kids were very surprised to see how big the dinosaur skeletons really were. Mikey asked were the baby dinos were? As he really wanted to see a baby one, so he would be bigger than a dinosaur! 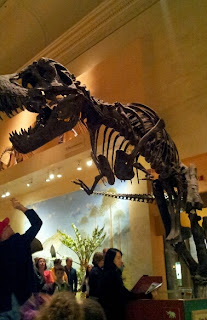 The National World War II Memorial was beautiful! We arrived, just as it started to down pour. Lots of people were fleeing, we just handed the kids an umbrella, and loved walking around the Memorial! Each state has a pillar, and w stopped at Missouri to honor my Grandfather. The marble surface, the fountains, and open memorial was all a very moving tribute to the thousands of men and women who gave their lives serving our great country. 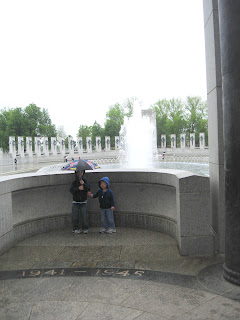 On Sunday we hiked all over Arlington National Cemetery. Okay we only went to the Kennedy site and the Tomb of the Unknowns, but I had forgotten how spread out the sites really were. Lesson learned...pay for the shuttle, it would be so worth it! The changing of the Guard, gave me chills, just like it did years ago. Mikey and Ryan loved watching the precision and slow way that the solider marched in front of the Tomb. We were startled when a teenager stepped under the chain, and the Guard left his post, and very respectfully shouted that this was a place of respect and honor, all visitors will remain behind the chains and railing. Then without missing a step he repeated the same steps to get back into his required stance and walking path. It was a very special place, and both boys did really well with all of the walking. 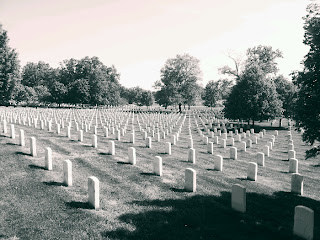 We then ended our weekend in Annapolis, and just walked around to enjoy the great weather we had on Sunday. The kids loved looking at the boats, and found two little ducklings swimming near their mom, Mikey is still talking about the ducks!

Thank you goes out to my husband Mike, for the great weekend. He also took us to Serendipity 3, for Frrrozen Hot Chocolate, so hop over and read that post too!