Back to School: All About the Lunch Box

July 30, 2012
As we are less than 30 days away from Kindergarten, we have been talking and preparing for the big day. After our visit to St. Louis, we have enjoyed watching the boys playing with the lunch boxes that our nephew no longer wanted. (We jokingly call them their "Murses," meaning "man-purse.") We wanted to introduce Mikey to a lunch box/bag prior to school so he could work with the zipper, we had no idea the fun that would come out of it! Ryan walks all over the house with his "murse," and puts everything he can stuff inside of it! From his blanket, to toys, snacks, crayons, or cars...basically if it fits, he carries it around all day. It is so funny to hear Ryan ask "Where is my murse?"Mikey on the other hand takes it very seriously, and has been asking to put his lunch in there so he can prepare for school! He tries so hard to open his packages, or containers all by himself with a very concentrated face. He wants to be able to be independent and tries very hard! Watching him unzip, open, and set out his lunch, has been very entertaining, and I hope he does well with it at school.

We asked Mikey what kind of lunch box he wanted, and he gave it some thought, and told us he wanted a Batman lunch box. "Batman, really son? Are you sure?" I asked him this question several different ways, and he always answered the same way. He tilted his head, and said "Yes, I want a Batman lunch box." Well, to say I was surprised was  putting it mildly, as he does not have one action figure, DVD, or toy that is Batman. So, I have no idea where he came up with Batman, but he was set on it! 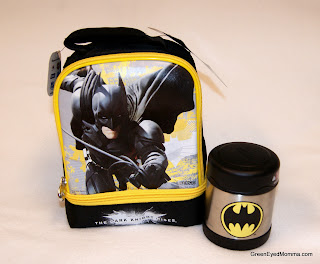 Our days are filled with lots of fun, and if it helps us prepare for Kindergarten, then we will pretend and have lunch at home in our new lunch bags! How are you preparing your Kindergartner? Does the idea of a lunch bag with zippers, packages, and containers blow their minds? What kind of lunchbox did your little guy ask for?