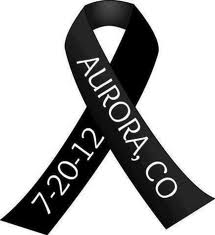 A tragedy happened this morning, in Aurora, Colorado while people attended the midnight premier of Batman Rises. A gunman opened fire into the theater, while the movie was playing. There are 12 dead, and 58 injured from this horrific act of violence.

I will not speak of the gunman, or speak of the atrocities that transpired. I want to honor those who perished and were injured, all while innocently watching a film they could not wait to see. All day there were hundreds of panicked tweets, of friends and family trying to make contact with the missing. Six local hospitals in Colorado helped tend to those with gunshot and burn wounds. Police who arrived on the scene, became emergency transport vehicles, as there were so many that needed to be rushed to a hospital. There are countless stories of parents, loved ones and complete strangers shielding the ones they love, or young children, by throwing themselves over their bodies. I am just in awe of the acts of valor and courage by the first responders, and the countless hours hospital staff worked together to assist the injured. I can not fathom the heartache that parents of the lost are feeling, especially as the received the official word that their loved ones were counted among the dead.

In the next few days, as names are released, will you join with me in talking about those that died and honoring their legacy? (Do not speak the name of the man who chose violence, rather than asking for help from medical professionals.) Lets honor the first responders and medical staff, by thanking them. Let us never forget the 12 people who perished, and make their names known. Join with me in honoring Aurora, Colorado, by praying for the families of the lost, who must go on without those they love. Take a moment to reflect on peace, and comfort in the coming days for those who mourn. Thank all first responders in your own community, tell them how much they do on a daily basis. Attend a local pray vigil or peace rally, light a candle, lift up their names, lower your flags to half staff, or honor them as you see fit.

Will you join me in honoring Aurora, Colorado?