{Review} Disney On Ice presents Rockin' Ever After 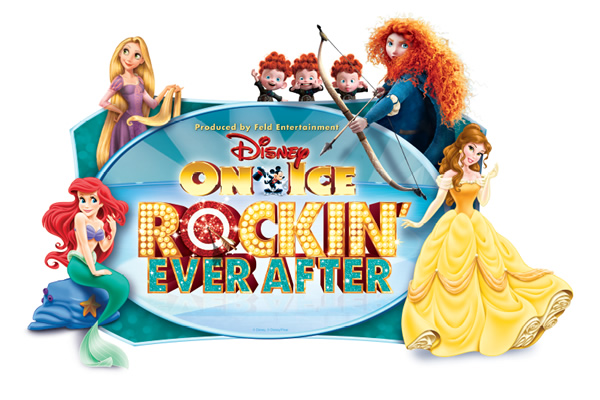 Disney On Ice presents Rockin' Ever After! at the 1st Mariner Arena
October 24th-28th

Jam to a Scottish jig as a group of royal contenders from the latest Disney/Pixar film, Brave, competes to win the heart of headstrong, sharp-shooting Merida, making her ice debut! Experience a show-stopping performance as Sebastian breaks out of his shell for one night only to make waves with Ariel.  A chorus of harmless hooligans from Tangled unleashes musical mayhem when they get a visit from the sassy and spirited Rapunzel and her charming ally Flynn.  And, get your feet moving as the Beast and his castle's enchanted entourage take center stage in a spectacular show for Belle. It will be a rockin' remix of royalty when Disney On Ice brings this superstar line-up to Baltimore! 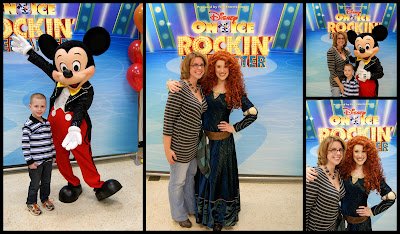 We arrived early for a very special opportunity to meet Mickey Mouse and Merida, before Disney On Ice presents Rockin' Ever After! One of my boys were very excited to meet Mickey Mouse, and the youngest thought the idea of meeting someone new was scary. My oldest son walked right up to Mickey Mouse and gave him a high five! I loved the spunk and personality of Merida, of Brave, as she and I pretended to shoot bows and arrows. She then gave me a high five and said "Way to go mom!" I have not had the chance to have one on one time, with Disney characters, so this was a moment I will never forget! 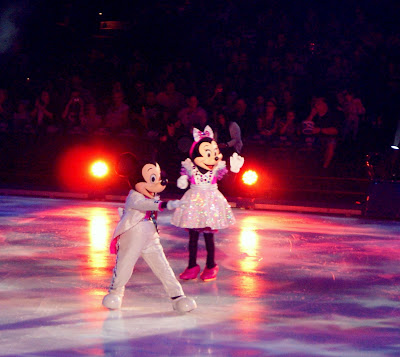 We found our seats, and noted that our seats were amazing. (Just for fun I walked all the way to the upper seats, and noted that there wasn't a bad seat in the Arena!) While we waited we listened and danced along with familiar Disney songs. Rockin' Ever After Opening Night was just moments away! The moment my youngest son saw Mickey and Minnie Mouse, he squealed with delight, and started clapping to the music. Donald and Goofy, joined in on the fun, and he shouted "Disney friends," as if they were long lost friends! Mickey Mouse was our host for the evening, and opened the show with "Hey Mickey You're So Fine," as only he can! 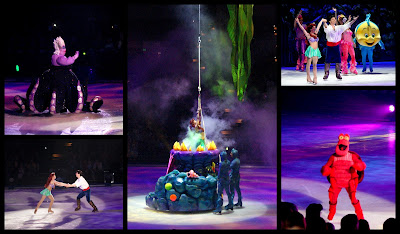 The next part of the show featured the Little Mermaid, Princess Ariel! Flounder and all of the sea creatures in their bright costumes were lively and you couldn't help but dance right along with them! I have always been a fan of Sebastian, and loved that once again he had to go looking for Ariel! The singing of "Under The Sea," was awesome, as the whole ensemble seemed to be on the ice, dancing away! With the finding of Prince Eric at the surface of the water, Ariel seeks out Ursala for help. Ursala's cave, and Ariel's transition to a human was amazing, you will not be disappointed! 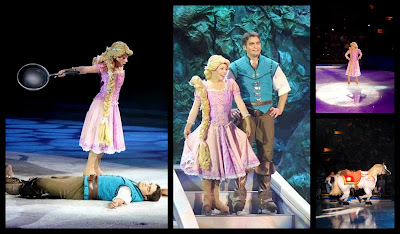 Rapunzel and Flynn, of Tangled, weaved the story of the towers and a frying pan plays a huge part of the story! Maximus the horse was very impressive, and gave much comedy relief while on the ice! Take any cheesy thought of a two person horse costume out the window, as two people are ice skating and moving flawlessly together to play Maximus! The lighting of the lanterns is a beautiful and meaningful part of the story of Rapunzel, and one you wont want to miss! 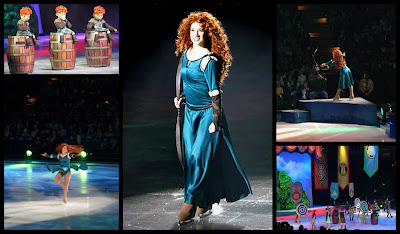 Merida made her ice skating debut after a short intermission! She was my boys favorite part of the show, as they met her in person! With a bow and arrow, she displays strength and confidence worthy of a Scottish Princess, when she tells the world she will be deciding her own fate. Each of her suitors fails to impress her, and she instead picks up her own bow and arrow! I cannot wait for the Brave DVD to be released so that we can watch it again, at home! Merida, is a Princess who knows what she wants, and nothing will stop her from being free! 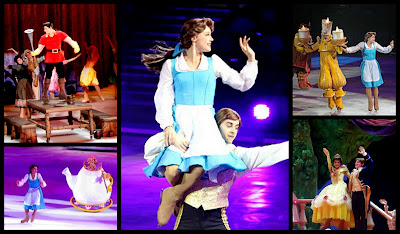 Belle and the enchanted characters from Beauty and the Beast, wrap up the show! I love Lumiere, and Mrs. Pots, and they help close out the show, as the dishes sing and entertain "With Be Our Guest!" Princess Belle and the Beast, find love and break the enchanted spell with a kiss of true love. The  entire cast joins them on the ice for a grand finale, and will leave you wanting to cry "Encore!"

Be prepared for dancing, big lights, impressive feats on ice, an amazing musical score, and insight into the many Disney characters we have come to know and love! There are numerous souvenirs, photo opportunities, face painting, and a night your Prince or Princess will never forget! My family loved Disney On Ice presents Rockin' Ever After, and have already asked if they can see it again. My boys are new to the world of princesses, but they are now open to the idea of finally sitting down and watching Beauty and the Beast, Tangled, Brave, or The Little Mermaid, now that they know that there is so much more to the story! Disney On Ice presents Rockin' Ever After, was a magical night that we were able to share as a family, and one we will never forget!

There are still many shows left to see before October 28th: 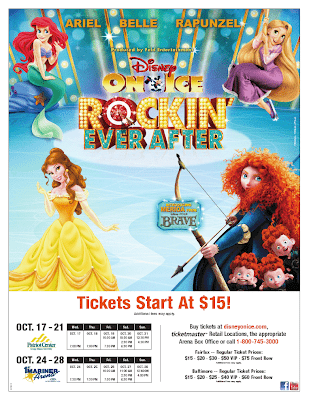 Visit www.ticketmaster.com or call 800-745-3000 and use promo code 6GROOTS to save $6, when you order or purchase your tickets!

*Valid ALL performances. NOT valid on Front Row or VIP seats. Limit 6 tickets per order. No Double Discounts. Additional fees may apply.


*I am a Feld Family Ambassador, and in exchange for my time and efforts in attending shows and reporting my opinion within this blog, as well as keeping you advised of the latest discount offers, Feld Entertainment has provided me with complimentary tickets to Feld shows and opportunities to attend private Feld pre—Show events. Even though I receive these benefits, I always give an opinion that is 100% mine.