October 30, 2012
Just in time for Halloween, are you ready to fold spiders and bats? Do you have money in your pocket, that just screams, "Fold me!?" Then this creative and amazing origami book is for you! I could not wait to open the hardcover Extreme Origami: Transforming Dollar Bills Into Priceless Works Of Art, and look at all of the awesome projects with full instructions. 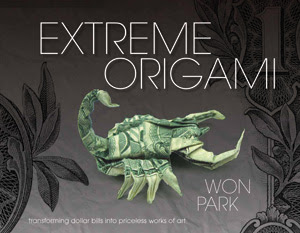 Are you ready to take the Extreme Origami challenge?

Won Park's highly creative and intricate work has long been admired throughout the origami community. Despite the popularity of the form, only a relatively small number of talented, creative artist publish money folds, and Won Park is widely regarded as a leading master of this specialty. In Extreme Origami, Won Park uses U.S. dollars to create his amazing paper sculptures. The fiber content in currency adds strength to the paper and keeps it from tearing during the hundreds of little folds and bends required to make his intricate designs,

In this book, Won Park shares twenty dollar bill designs, each with step by-step instructions and diagrams illustrated by Marcio Noguchi. Models in the challenge include a Formula 1 race car, a toilet, a butterfly, a koi fish, a scorpion, a sea turtle, a fox, an ox, a marlin, a car, a praying mantis, a dragon, a spider, a stag beetle, a stegosaurus, a bat, Pegasus, a fighter jet, a battle tank, and a pig.

The author provides helpful tips for those with an intermediate skill level, which contains a list of basic tools needed to begin folding, The book also includes a glossary of origami Terms & Symbols the author uses in his designs.

"As with anything you do, origami - especially extreme origami - takes practice, lots of practice. If you are already an advanced folder, you are well prepared to take the Extreme Origami challenge offered by this book." - Won Park

Extreme Origami can be found on Amazon, and other major book retailers.

About the Author:
Won Park is an origami artist who has been practicing for more than 30 years, His specialty is folding paper currency from the United States and other countries. Always striving to take the art form to new extremes, he has created a wide range of very intricate and whimsical models. He currently resides in Honolulu, Hawaii.

*I was not compensated for this review, but sent a book for my personal review. All thoughts and opinions are my own.