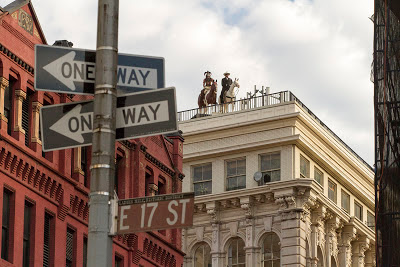 FANS SPOT LIFE-SIZE STATUES OF THE LONE RANGER AND TONTO TRAVELING THE U.S. FOR A CHANCE TO WIN A TRIP TO NEW MEXICO

In support of Disney/Jerry Bruckheimer Films’ “The Lone Ranger,” releasing in U.S. theaters on July 3, Disney kicked-off of The Lone Ranger Ride for Justice Tour in New York City's Union Square on June 12th. Life-size statues of the Lone Ranger and Tonto appeared atop an iconic building on 18th Street in Union Square. Fans gathered for a meet-up in Bryant Park and participated in a hunt to find the statues and were given Lone Ranger prizes and screening passes.

The tour continues across the country ending in L.A., just in time for the movie's opening on July 3rd.  The Lone Ranger and Tonto will be gracing rooftops, mountaintops and famous landmarks along the way, only staying long enough in each city to be discovered by the locals before they continue their ride westward to Orlando, Miami, Atlanta, St. Louis, New Orleans, Denver, Salt Lake City, San Francisco, Hollywood, and Burbank.

Fans who find the Lone Ranger and Tonto are asked to enter at  Disney.com/loneranger/ and to Instagram or Tweet a photo or Tweet the location with the hashtag #LRRideforJustice for a chance to win a trip for two to New Mexico. Follow the films' social channels to participate in the hunt to find the statues, or to guess their location.  No purchase necessary.  Void Where Prohibited.   Ends 7/8/13 at 11:59:59pm EST. Open to legal residents 13 years or older of U.S. (including D.C.). Restrictions and limitations apply.  Sponsor Walt Disney Studios Motion Pictures. 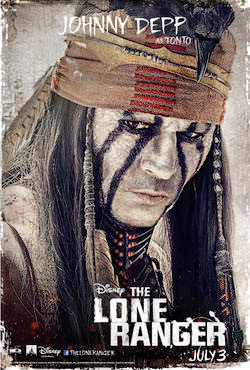