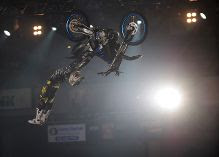 Have a thrill seeker in your family? Want to see brave men and women defy gravity and face danger head to head? Looking for a great holiday gift? I have amazing news, to share!

Legendary Nuclear Cowboyz FMX tribes, the Soldiers of Havoc and the Metal Mulisha return for a never-before-seen action-packed event that takes place in the war torn city of Los Angeles during the year 2150. The tale unfolds as the two tribes' survival is threatened and besieged by an evil force, The Tempest and her electrifying Cyborg Army. Catapulted into the heart pounding fury and frenzied excitement are the sizzling Nuclear Cowgirlz, whose allegiance to their tribes only intensifies the Tempest's rage to destroy the Nuclear Cowboyz. The Soldiers of Havoc and the Metal Mulisha's battle is fought through fearless freestyle gravity defying stunts, combined with outrageous pyrotechnic and laser displays synchronized to heavy metal, rock alternative and electronic dubstep music. Nuclear Cowboyz 2012 has the greatest cast of freestyle motocross, trials and quad riders ever assembled, including recent X Games 17 medalists Ronnie Faisst, Adam Jones and Mike Mason. Joined by world-class medalist riders Taka Higashino, Beau Bamburg, Derek Garland, Nixey Danielson, Brody Wilson, Jimmy Fitzpatrick, Dustin Miller, Wes Agee, Matt Buyten, Geoff Aaron, Keith Wineland, and Derek Guetter, Nuclear Cowboyz takes unleashed power to its massive ramps in a freestyle performance of pure danger and raw combat. 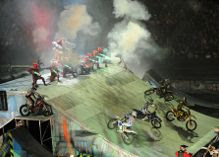 Save $5 per ticket on all performances with code BLOG5 via Ticketmaster.com

*I have partnered with USFamilyGuide.com to bring you the latest show details and discounts. I was offered tickets as compensation, to review the show with my family. All thoughts and opinions are 100% my own.